Use the links below to find the following information about Sounds In Motion:

What Is SIM?
SOUNDS IN MOTION is an interventional program designed to develop listening skills in children, which in turn helps to improve articulation, and vocabulary skills, auditory memory, phonemic awareness and early literacy. Created by Frances Santore, M.A., CCC-SLP beginning in the mid-1990s with the help of Kindergarten and First Grade teachers at the Horace Mann School, SIM is used primarily with pre-kindergarten through first grade students, and may also be applicable to older students who are having difficulty learning to read. It enables speech-language pathologists to work collaboratively with teachers in regular education and special education classrooms, in developing oral language and early reading and writing skills. It also acts as an early diagnostic tool, identifying children who may need further evaluation.
Goals of SIM: The SOUNDS IN MOTION approach has a number of goals. Uniquely, it pairs kinesthetic gross motor movements with phonemes to teach articulation, phonemic awareness and sound/symbol association; it addresses improvement of receptive and expressive (oral and written) language skills, and it helps children develop the ability to become actively involved in the task of listening – a communication activity that is generally overlooked in academic instruction. Of the four communication activities that are taught and used during a child’s school years, (listening, speaking, reading and writing) listening, which provides the foundation for all aspects of language and cognitive development, and plays a life-long role in the processes of learning and communication, is the activity that is most used, and yet, it is the least taught.
How does SIM work? Since SIM is supplemental, it can be used to augment most reading programs. It consists of 15 weekly sessions, each lasting 30-40 minutes. The lessons are taught collaboratively by the SLP and the classroom teacher. Every session includes: a review of the body movements for previously taught phonemes; an introduction of movements for 2 new phonemes and practice combining these movements with those previously learned to create syllables and words; a specific listening activity (such as following directions, or auditory discrimination); and a language activity in the form of a Rebus story, or rhyme. Since great emphasis is spent on listening skills in SIM, two sessions are also devoted to teaching the children about noise abuse and how to protect their hearing. Children are tested prior to, during, and after the completion of the program to evaluate their communication and reading skills. This program was initially created to address the need for treating the large number of children who were being referred for articulation therapy, by providing some weekly stimulation in auditory perception and phoneme production in the classroom. A technique designed to teach early learners to become actively involved in listening was introduced through the use of “whole body listening" (S.Truesdale, LSHSS, 1990). To develop correct auditory perception and articulation stimulation of phonemes for the entire class, “body movements,” were introduced. The body movements are part of the VerboTonal Method, an aural habilitation and rehabilitation program for children and adults created by the Croatian linguist and speech scientist, Petar Guberina. Guberina, a contemporary of Jean Piaget, had learned from him the importance of movement and play in helping children develop cognition and language. The body movements, which include characteristics of tension, duration, pitch, intensity, and placement of the articulators in space, associated with each phoneme were designed by kinesthesiologists under Guberina’s direction. The goal was to establish a movement with the above characteristics so that, while a child was vocalizing and engaged in doing the movement, correct articulation of the phoneme would occur spontaneously. Guberina believed that by providing visual, kinesthetic and proprioceptive clues to the deaf child, he could augment acoustic information about sound quality which was not being transmitted to the brain. For children with normal hearing the auditory channel is also activated, thus helping to develop correct articulation, auditory perception, and auditory memory for the phonemes. Top Of Page
Movement Characteristics
All of the body movements are based on the following characteristics of each speech sound: pitch; duration; tension; place of the articulators in space; and intensity. For the three bilabials (b - m - p) for example, the movements are very different. The (b) is a relaxed low frequency sound that is short in duration. The movement is made low in front of the body. In doing the movement you clasp your hands together, keep your arms straight, bend at the waist, and gently swing your arms from side to side while saying "b - b - b." The (m) is a slightly higher pitch and is longer in duration. it is a relaxed sound. The movement is made mid-section in front of the body. You bend slightly at the waist, stretch one arm across your body palm up, and slowly move it toward the other side (as if you were showing a variety of delicious dishes on the table) and say "mmmmmm" while you are moving your arm. The final bilabial, the (p) is the most tense of these three sounds. It is low in pitch, but made high on the body because of the increase in tension. It is a quick, explosive sound that is made by holding your arms above your head, making fists, and then popping your fists open as you say "p" (be careful not to say "puh"). Top Of Page
Clinicians in the Classroom
Sounds in Motion: Phonemic Awareness
By Fran Santore, MA, CCC-SLP
August 21, 2006
Article originally published in ADVANCE and available here.
Research Data
I. The following results are CVC Nonsense Word test results administered to experimental (SIM) and control (No SIM) classes by therapists at schools in Saratoga, NY and Bryam Township, NJ in 2007. (Click the image to enlarge) 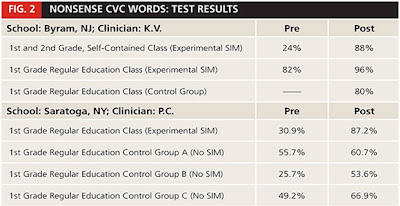 II. PALS: C.S. (Colonial Heights, VA) - All children in six Kindergarten classes (approximately 120 students) passed PALS test in the year that SIM was introduced. This is the first time this has occurred. The previous year, 12 children failed the test.
III. DIBELS data submitted by therapists evaluating SIM program with Kindergarten students in a rural school in South Carolina in 2008 and 2009. (Click photos to enlarge.) 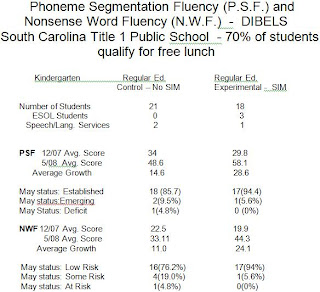 <
IV. ECLAS literacy test results 2009 from a Public School in NYC (Kindergarten class at P.S. 92) in which 96% of the students qualify for Title 1 funding. (Click photo to enlarge). 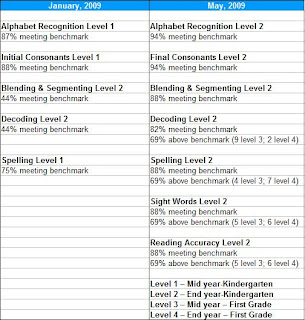 V. These GRTR results are from a Pre-K class that used SOUNDS IN MOTION at the James M. Brown Elementary School for the 2010-2011 in Walhalla, SC. 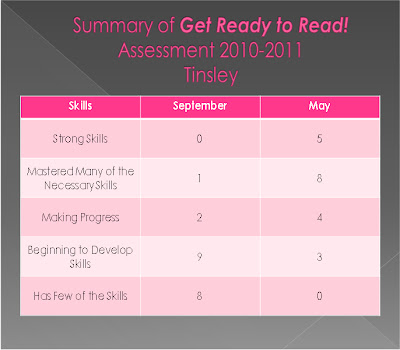 Top Of Page
Student Writing Samples
The following are writing samples of children in kindergarten who have been exposed to Sounds In Motion. The children become confident that they are able to spell because they “hear the sounds.” They often begin to write spontaneously. 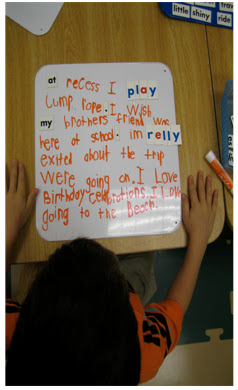 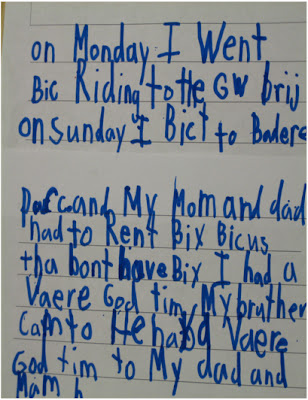 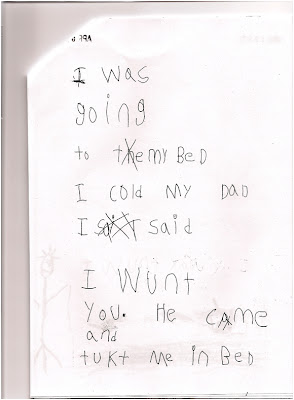 Sounds In Motion Is: